When I was driving from Houston to Atlanta for the birth of my first grandchild, Lillian, I stopped at quilt stores along the way.  I bought fat quarters of what I call “children’s brights”.  It is so much more fun to shop if you have a project in mind.

With this quilt I used a common background that was darker than the “children’s brights.”  I had an adorable dark blue airplane fabric that was not used  because there was not enough contrast between it and the background.

The blocks are 8″.  The squares in the blocks have a finished size of 2″.  To make a pieced border fit I find it best to base the border math on the math used in the  quilt.  I made a 2″ black inner border, a pieced border of 2″ squares and then an outer black border.  The fabric does not show in the photo but it is a polka dot with many bright colors on the black.

The Texas Two-Step block is shown below.  The block has a diagonal line which makes many sets possible. 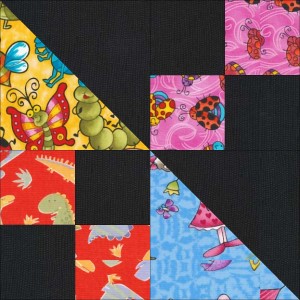 I am a sixth generation Texan that has always loved to sew. I took my first sewing lessons at the age of eight at the local Singer sewing-machine shop. I live in Houston, Texas with my husband an economics professor at Rice University. We have three grown children and two cherished grandchildren. I have been making scrap quilts for 25 years. Martingale published my three books: Simple Strategies for Scrap Quilts, Simple Strategies for Block-Swap Quilts and Patchwork-Play Quilts. View all posts by Lynn Roddy Brown

One thought on “Texas Two-Step — Brights for Lillian”